Everywhere else in the country it seems to be cold and snowy. Here in LA, there’s a (slight) chill in the air and rain is forecasted for this weekend. Time to make soup!

Magic Soup – I started making tortilla soup for my family a few years ago. My kids love being able to put all the toppings on themselves. My son loved it so much, that he declared it to be Magic Soup! And we’ve called it that ever since. There’s lots of variations to this soup – pureeing it with tortillas to thicken it, and using a variety of dried chilies to shake things up a bit. I make a very simple version, which is adapted from a recipe from Rick Bayless.

One kid fist pumping his Magic Soup. The other one crushing her tortilla chips into her soup in dramatic fashion. Hands on food is fun!

Put the tomatoes and chili powder in a blender. Cook the onion and garlic in hot oil until golden and then add to the blender. Blend everything until smooth. Add a little oil to the pan, if you think it needs it. Add the puree to the pan and cook until thickened (stirring almost constantly). This should take about 5 minutes. Add some of the broth to the blender and blend to clean out the blender. Add that and the rest of the broth to the paste. Simmer for about 20 minutes. Season with salt. If you don’t have any cooked chicken, you can cook some chicken chunks in the broth. Put out the toppings and let the magic begin! Another magical thing about this soup is that it also freezes really well. So make a double batch and you can cook once and eat twice.

Another soup that my whole family loves is Baked Potato & Leek Soup. I make this recipe from Fine Cooking with a few changes: 1)I puree the whole thing and leave no chunks of potatoes, 2)I usually puree only half the potato skins, and 3)Sometimes I don’t bother with the bacon. I know that last one sounds crazy, but the soup is so good, that it doesn’t even need it. The leeks are really what make this soup. I’ve made it with onion, but it doesn’t taste as good. This soup is velvety yet hardy, and always comforting. 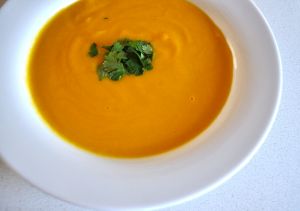 Another one of my favorite soups is my mother-in-law’s Gingered Butternut Squash Soup. You can find that delicious recipe here. Let them eat soup!

“Life is a kitchen – put on your prettiest apron and whip up something incredible.”

One thought on “Magic Soup (aka Tortilla Soup), and Baked Potato & Leek Soup”